We call April this way as a reference to the coming of spring. The Greek word for spring is “άνοιξη” (means “opening“) and the word “April” is thought to derive form the Italian “aprire” (to open). April is also the first month of the year to have 30 days, it is quite often Easter month, and it starts with good humor – the pranks of April Fools’ Day or “April Fish” as it’s called in France, Belgium, The Netherlands, Italy, and French-speaking areas of Canada and Switzerland.

Although April Fools’ Day is recorded as a custom since the middle of the 14th century, and has become popular since the 19th century, the day is not a public holiday in any country. It’s just the day where you would expect everybody to play a hoax on you and call you “inocente” in Spain (a word meaning both “innocent” and “credulous”) or simply shout out “April Fool” in English-speaking countries. Living in the info-world that we do, the habit of the pranks of the first of April has become such a standard in the last a hundred years that we couldn’t help compiling our own Top 10 of April Fools’ Day Hoaxes at the end of our article. Enjoy and be inspired. 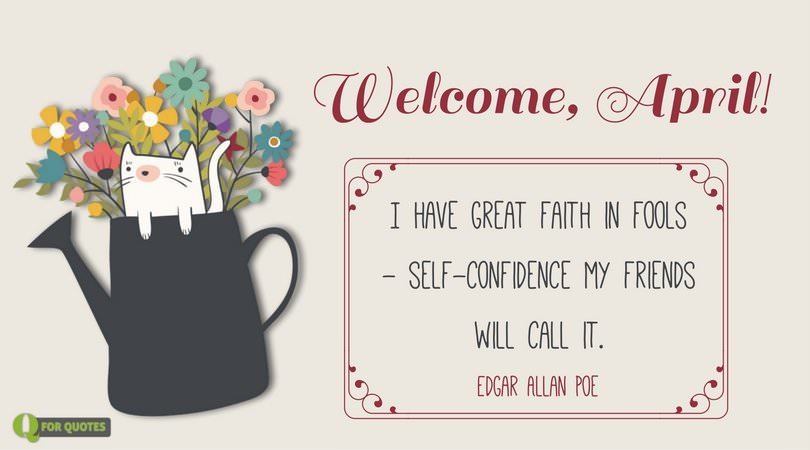 Welcome, April! I have great faith in fools – self-confidence my friends will call it. ― Edgar Allan Poe Hello, April. Be a month of joy and renewal. Hello, April. Be a month of rebirth, regrowth and renewal. Whether on TV, the radio, the press or over the internet, these are the greatest hoaxes man has ever come up with: In 2001, Gevalia Coffee’s advertising made this subway vehicle pop up in front of Copenhagen’s town hall. The accident site was surrounded with a tape saying “Uventede gæster?” (unexpected guests?) referring to the accident of running out of coffee while having guests. Although it looked as if one of its cars had an accident, and had broken through and surfaced on the square in front of the town hall, in reality, it was a retired subway car from the subway of Stockholm cut obliquely, with the front end placed onto the tiling and loose tiles scattered around it. In 1949, DJ Phil Shone of radio station 1ZB warned his listeners that a swarm of wasps was headed towards Auckland, New Zealand. The swarm was supposed to be a mile wide, and listeners were warned to take measures in order to protect themselves, such as wearing their socks over their trousers when they left for work, and leaving honey-smeared traps outside their doors. The advice was followed by Auckland residents spreading panic across the  city until the radio producer had to finally admit it had all been a joke. In 1962, a Dutch artist named Edo van Tetterode was walking along the beach near the town of Zandvoort, Netherlands, when he reported a strange finding in the sand. It was a small washed up statue that looked just like the famous statues on Easter Island. The statue seemed weathered enough to convince that the ocean currents must have carried it all the way from the South Pacific to the Netherlands, until the artist made a confession on April 1 of the same year that he had made it and planted it on the beach. Meanwhile it had made worldwide headlines and huge crowds had showed up to see it.

The April 1998 issue of the New Mexicans for Science and Reason newsletter contained an article making an outrageous claim. The Alabama state legislature was supposed to have voted to change the value of the mathematical constant pi from 3.14159 to the ‘Biblical value’ of 3.0. No matter how far-fetched the news appeared to be, they were considered true and the article spread onto the internet, and then it rapidly spread around the world, forwarded by email. When hundreds of citizens started making phone calls to protest, the world realized that the original article, a parody of legislative attempts to circumscribe the teaching of evolution, written by physicist Mark Boslough, had simply gone too far. In 1962, SVT – Sweden’s one and only black and white TV channel at the time – broadcasted a 5-minute special featuring their technical expert Kjell Stensson, who informed the public that, thanks to a new technology, viewers could convert their existing sets to display color reception. Stensson made an in-depth analysis of the physics behind the phenomenon and thousands of people tried it, somehow unsuccessfully. It wasn’t until exactly 8 years later when regular color broadcasts commenced in Sweden. On March 31, 1989, thousands of motorists driving on the highway outside London noticed a strange flying object. Many of them pulled to the side of the road to watch the bizarre saucer, which finally landed in a field on the outskirts of London. Londoners immediately called the police to warn them of an alien invasion. When the police arrived on the scene, it was proven that he saucer was in fact a hot-air balloon that had been specially built to look like a UFO by Richard Branson, the 36-year-old chairman of Virgin Records. Branson’s intention was to land the craft in London’s Hyde Park on April 1. Unfortunately, the wind blew him off course, and he was forced to land a day early in the wrong location. In 1976, British astronomer Sir Patrick Moore told listeners of BBC Radio 2 that unique alignment of two planets would result in an upward gravitational pull making people lighter at precisely 9:47 am that day. He invited his audience to jump in the air and experience “a strange floating sensation”. Dozens of listeners phoned in to say the experiment had worked, among them a woman who reported that she and her 11 friends were “wafted from their chairs and orbited gently around the room. The Eruption of Mount Edgecumbe (1974)

On April 1st, 1974, the inhabitants of Sitka, Alaska woke to find out that clouds of black smoke were rising from the crater of Mount Edgecumbe, the long-dormant volcano that was near. The worrisome sight made people get out of their homes and onto the streets to gaze up at the volcano, until it was revealed that a local practical joker named Porky Bickar had flown hundreds of old tires into the volcano’s crater and then lit them on fire, all in a (successful) attempt to fool the city dwellers into believing that the volcano was stirring to life.

On April 1, 1980, Boston television station WNAC-TV somehow repeated the hoax when it reported that Great Blue Hill in Milton, Massachusetts had erupted. Panic soon grew and residents started to flee their home until the hoax was revealed, and executive producer of the 6 o’clock news, Homer Cilley, was fired. Apparently, humor was somehow absent back in the 80’s…

The BBC television programme Panorama ran a hoax in 1957, showing Swiss residents harvesting spaghetti from trees. They claimed that the despised pest, the spaghetti weevil, had been eradicated. A large number of people contacted the BBC wanting to know how to cultivate their own spaghetti trees. It was, in fact, filmed in St Albans. The editor of Panorama at the time, Michael Peacock, approved the idea, which was pitched by freelance camera operator Charles de Jaeger. Peacock told the BBC in 2014 that he gave de Jaeger a budget of £100. Peacock said the respected Panorama anchorman Richard Dimbleby knew they were using his authoritativeness to make the joke work. He said Dimbleby loved the idea and went at it with relish. Decades later CNN called this broadcast “the biggest hoax that any reputable news establishment ever pulled”.

So Good to Me?… | Monday Quotes and Memes