12+1 Loyal and Trustworthy Dogs Making their Point in Art

Dogs were not always kept as pets. Just around 16th century it started to be considered fashionable for an aristocracy lady to carry with her a small-sized dog, a lap-dog. But before that, dogs made their presence felt around humans as companions in hunting, guardians, even deities.

Creatures affectionate but fierce, loyal and trustworthy, it is not to wonder that they have been often depicted in art in various forms and mediums, as a side figure or even as the main subject of the work. The excavations that took place early in the 19th century in Pompeii revealed elaborate mosaics and amongst them this imposing image of a fierce and robust dog. The image is made from the assemblage of small pieces of colored stone and is set on the floor of a residence known as the house of tragic poet. The inscription in this image says ‘cave canem’ which means beware of the dog. Some things never change.

2. Detail of a miniature of King Garamantes being rescued by his dogs, c. 1230 The ancient legend of King Garamantes, who escaped exile by summoning 200 of his most loyal hounds to free him from his captors is a tale of the exemplary loyalty exhibited by canines. The detailed miniature from the Rochester Bestiary portrays the crowned king being held by two jailers while nearby large dogs arriving from outside the frame assault the enemy line.  As the accompanying text emphasizes, the dog is not merely an animal in this illustration, but a symbol of protection against adversaries and evil.

This small scale etching of a dog can speak volumes. Within the convention of a simple black and white drawing it is undoubtedly a skillful bundle of lines that flow harmoniously on a little piece of paper. Using with these lines Rembrandt manages to convey in targeted detail not only the canine likeness of the sleeping animal but also the certainty of life, warmth of presence and a feeling of peace that emanate from it. Exactly the kind of thing that marks the difference between a very good artist and a great one. 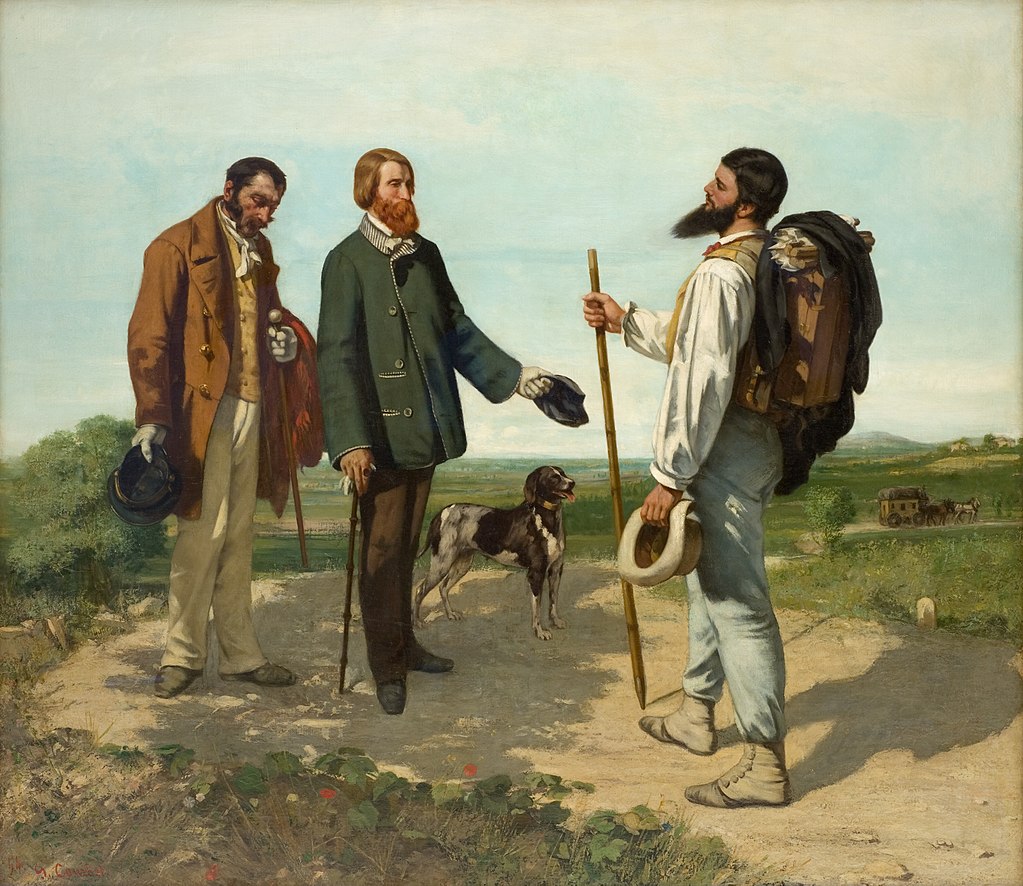 The subject of this painting is an encounter in the country between Courbet himself and a friend of his named Bruyas, accompanied by his servant Calas and his dog. This chance meeting is in reality a juxtaposition of two worlds, and most importantly the painting makes it a point that these two worlds are equal. Never before though an aristocrat and a plain person could be seen occupying on equal terms artistic space, let alone allowing the plain, unpretentious man of the country that Courbet was to be so composed.  And what about the dog? Though obviously not the protagonist in the painting it is remarkably well-executed and strategically placed in the center of the painting. Try to imagine the two diagonals crisscrossing the painting and you’ll see it. And such a placing, in such an important painting cannot go unnoticed.

From as far as the 16th century, King Charles Spaniels were one of the breeds that ladies used to carry as they travelled around town. Often associated with royalty and high class, they have remained through the years a favorite breed of lapdogs. In this painting Manet has presented the dog as a royalty itself, placed on a dark red velvet cushion. Manet, a leading figure of impressionism, used clear, frank brushstrokes for the head of the dog so that its eyes still look at us with vividness. The looser, swirling brushstrokes for the coat of the dog give a sense of artistic freedom in the painting while we still can cherish its fluffiness .

Renoir painted this image of a Japanese spaniel for his friend Henri Cernuschi, a banker and collector of Asian art. The breed, a favorite of the Japanese imperial family, was considered fashionably exotic when Cernuschi brought the dog to France in 1873. Renoir painted Tama in an impressionistic manner, avoiding harsh outlines and merging colors and shapes. Exact description was not the concern of impressionism, so part of the dog melts into the bright  yellowish foreground. We cannot easily tell where its hind legs exactly begin and end yet every bit of cleverness and charm this dog might have possessed are definitely there. 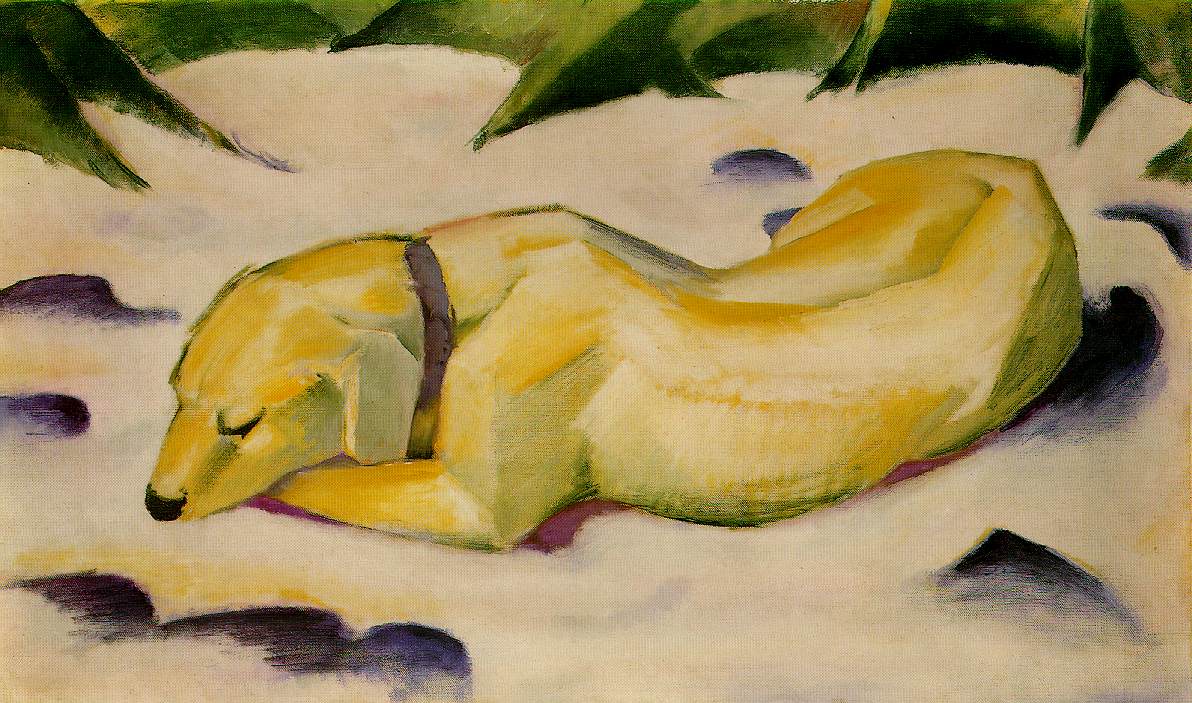 Franc Marc was one of the founding members of the Blue Rider, an avant-garde group of artists that was active around 1911. Marc believed in the connection of the spiritual and the artistic and was seeking for a way to express his artistic interests and emotional states through color.  Animals were also frequent subjects in his painting. Marc considered them more spiritual and closer to nature than humans. In Dog lying in the snow there is a metaphysical atmosphere of serenity and simplicity. As the dog sleeps peacefully atop of the snow it brings about a notion of purity and calm suggested by the use of color.  The yellow pigment used for the dog looks radiant due to use of dark blue shades. Placed in the center of the painting the dog itself appears to shine brightly but totally unaware of its glow. 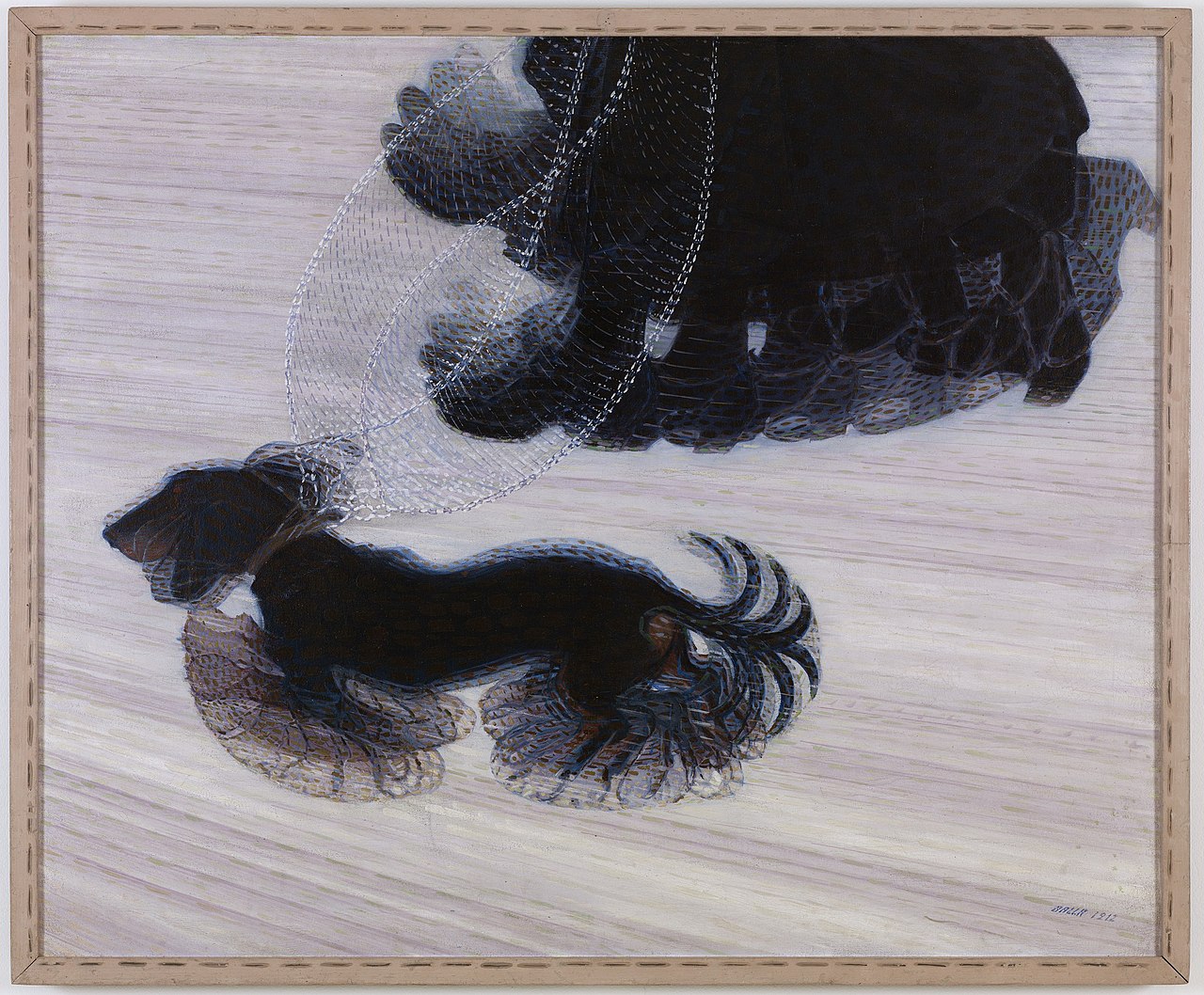 Futurism, the last avant-garde art movement, was a mixture of many contradictory ideas. One of them was their fascination with movement and speed and the miracle of time-space relation in the refreshingly new city environment.  They tried to convey their enthusiasm in the medium of painting with results not always heart warming.  This particular painting though with its small scale ambition and whimsical theme looks almost ahead of its time. Cute, cartoon-like, succinct, humorous, one could say it nods towards the Kawaii before Kawaii was invented. Keith Haring had created an expansive visual language laden with energy and euphoric celebration of life. He started as an underground figure in the New York scene doing grafitti in blank advertising spaces in the NY subway. His simple, stark, intense style, with bold lines and vivid colors earned him public recognition. Dogs appear many times in his work. In fact his way of drawing a dog muzzle has become emblematic for pop culture. He has done this so many times, so successfully that to be honest it was not easy to choose one in particular from his captivating oeuvre.

In his intent to “communicate with the masses” Jeff Koons combines elements from popular and elite culture. Take Puppy for instance where he has put together flowers and puppies. In fact this work portraying a West Highland terrier echoes the 18th century formal European garden as much as all the sentimental iconography of topiary and puppies seen in postcards all over western culture. The 13 meter high work consists of marigolds, begonias, impatiens, petunias, and lobelias brought together by a steel platform shaping the form of a puppy. Despite the overload of emotion Puppy with its large scale seems not only out of proportions but also out of control as it is literally continuously growing. 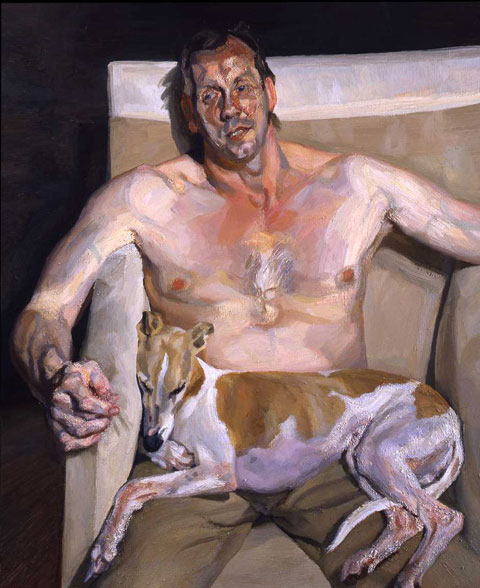 David Dawson was Lucian Freud’s assistant, friend and repeated model for the last two decades of his life. In this portrait of Dawson and his whippet, Eli, Freud painted human and canine alike:  vulnerable, in-your-face, overwhelmingly fleshy. But human and canine are not alike as an outcome: whereas the human sitter looks -as almost all Freud’s subjects- graciously disheveled and exposed, the dog is engagingly beautiful and composed. As a matter of fact all dogs painted by Freud look like that: clear strong presences even in their sleep. This can give us some food for thought, doesn’t it? 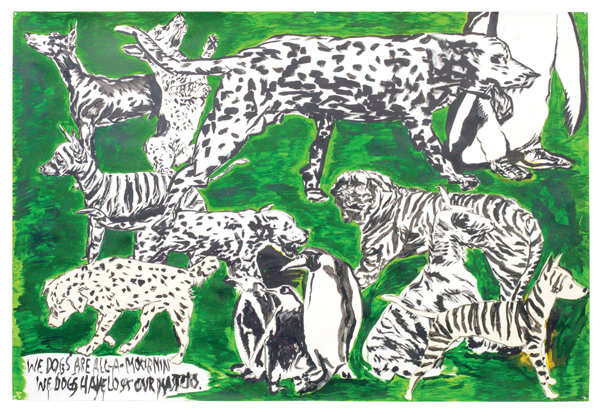 Photo found at The Paris Review

His cartoon-like style is fresh and edgy. Pettibon, an ardent dog person likes drawing dogs and they appear throyghout his work. He prefers Dobermans and Dalmatians, the former because they’re so recognizable that, he argues, you don’t have to draw the whole dog; the latter because their distinctive markings are visually interesting within Pettibon’s black-and-white palette (“it’s like doing a zebra”). In this painting he has depicted his Brussels griffon named Boo, another frequent canine muse for him. The reflection gimmick used here and the vibrant and bold ink strokes make the drawing intense but funny. The drawing looks like a fanzine page with the open, enigmatic quote “the reverse is also true”. Hmm.

This1656 painting by Diego Velázquez has been one of the most widely analyzed works in Western painting. Its complex and enigmatic composition raises questions about reality and illusion, and creates an uncertain relationship between the viewer and the figures depicted. And in the foreground there it is: a Spanish Mastiff made famous just for being there.