The mother-child bond is a magical one, undoubtedly one of the most affectionate there are. Protection, care, nourishment for their children is in any possible way the sole effort of every mother.

An image of a loving mother and a blissful infant has always been rich in emotion. How could artists resist so much feeling? No wonder such iconography appeared in manyfold ways in artistic production over the centuries. This painting is generally attributed to Leonardo DaVinci but due to the harsh outlines and the simplicity of the landscape scholars believe that it was finished by his student Antonio Boltraffio. The Madonna looks at Baby Jesus absorbed and mesmerized by the miracle of His existence, full of maternal love and tenderness.  The  blue color of her mantle, characteristic of the Madonna iconography of the time is reflected in the two openings in the background and thus connects the enclosed scene to a vastness of space and the infinity of the moment.

Dieric Bouts has based this small image on the ancient Byzantine formula for the affectionate Virgin (glykophilousa)—a type popular in the Netherlands. The image has not the godlike detachedness of an icon, though. Instead of the gold-leafed background used in orthodox icons Bouts has chosen a simple dark tone that allows the mother and child figures to blossom and breathe. There is a mesmerizing, fleshy quality in the way mother and child touch, full of tenderness and motherly devotion. 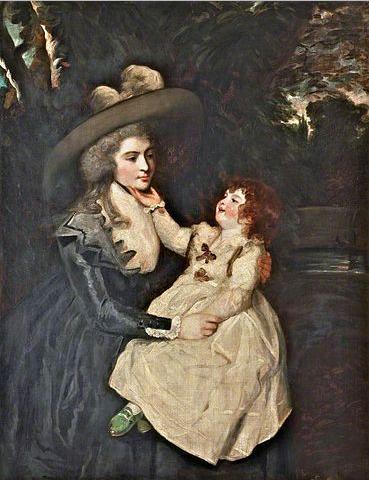 Reynolds was a famous British portraitist of the 18th century who emphasized the natural grace of children. In this painting of a widowed mother and her child, the cherub-like little one touches playfully the chin of her mother. The sweetness of the scene stands in contrast with the solemn, dark colors that fill the painting. Wisely applied soft red fleshy tones make the faces glow with the warmth of love and tenderness.The dark surrounding only accentuate the charming exchange of devotion and love between mother and child. Although he became famous as the painter of beautiful women of his time Utamaro made numerous mother and child colored woodblocks. In this one, mother and child are drawn to each other in a  graceful lifelike movement. The complementary green and reddish tones  pinpoint the duo together.We can literally feel the child dive into his mother as well as the the mother lean on him with care and love. When a painting includes a red velvet sofa it is bound to be eye-catching but what really captures the eye in this mid-19th century painting is the intimacy and the tenderness of the depicted bond. Placed in an affluent bourgeois interior the daughter lies back in a languid posture of rest and complete trust while her mother leans softly towards her with pride. A serene, quiet happiness overflows the painting.

Photo from My Daily Art Display

This work is a natural, relaxed portrait of a mother-and-son duo that both look like they enjoy an ordinary moment together. Cassat preferred to paint ordinary people as opposed to professional models because she wanted an unpretentious portrait of an honest mother-and-child relationship. The impressionistic brushwork in the dress in relation with the more detailed work in the faces produce a cheerful but calm ambience. The light and subdued earthy green tones, and the extensive use of white support this feeling of ease and clean-cut happiness. Early 20th century was a time for experimentation with color and the expression of emotion over realism. Within such framework Macke keeps body posture and color as his ways to convey the emotion of this tender moment. Blue and orange in earthy hues set up the environment of warm, motherly embrace and filial love. As the infant in the image is Macke’s son Walter in the arms of his wife Elisabeth it is most likely that Macke shares his own awe and pride at the miraculous bond of mother and child taking place before him. Kollwitz is one of the most prominent early-20th century German artists. Her themes are taken from every day-life with an emphasis on hardship and pain. As a woman Kollwitz could understand the full intensity of motherhood in its agonies as in its joys. In this small black and white lithograph with few strokes she brings forth all the tenderness, the pride and the joy of motherhood in what seems an intimate, ordinary exchange between mother and child Picasso has painted mother and child couples many times. In this one, the larger than life figure of the mother looms reassuringly over her infant child. The child yields to her, reaching out with open arms in love and trust. The vivid, warm orangey tone of the mother is set against the cool blue of the background and the pale blue of the child’s dress. She is the spot of warmth, the source of life, the power of the sun. 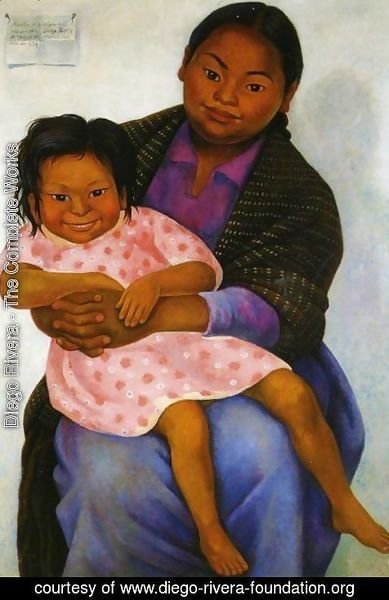 In this painting, mother and daughter look happy and content in their own little universe of love. The plain clothes and the slightly tired look in the mother’s face tell the story of her continuous daily efforts to make ends meet. Yet the vivid, intense colors of the painting tell a story of joy.  This is an ode to the everyday joys of mother-daughter bonding despite anything else. Neel’s work stands at a tension  between the realistic and the distorted, offering stark realism and the quirks of heighten emotion at the same time. In Nancy and Olivia at first glance there is the powerful look in the mother’s eyes. She looks as if she is caught unaware in the intimacy of the moment. Then there is the color: vivid washes of warm green, pale ultramarine hues, cool mint tones. The domestic is revamped, as much in the sentiment as in the  hues. The recognizable and  familiar scene turns bright and fresh anew. Among the everyday moments Joffe ‘s work revolves, the relationship of mother and child is a frequent topic. This painting shares the structure of a family snapshot but the fresh, energetic brushwork and the quirky distortion of the bodies defy such realistic reference. The high tonal contrast of the painting brings even more life to it. The emotions that flow calmly are of tenderness and joy. This painting is about the celebration of what these two people are, a loving proud mom and a happy daughter.

111 Mother’s Day Messages That Will Inspire You