When it comes to getting optimal results, you might as well leave things on luck, but the truth is, making your absolutely best effort is always the ideal solution.

Working hard is what really supplements inspiration for the outcome we’re after, so no wonder why so many famous people had so much to say about it. Our carefully selected hard work quotes will give you motivation and strength when you have to make that extra mile towards success. If you see me less, I’m doing more. Nothing worth having comes easy. Theodore Roosevelt Don’t wish it were easier. Wish you were better. Jim Rohn Hard work is the formula for success. Lailah Akita The greatest weariness comes from work not done. Eric Hoffer All happiness depends on courage and work. Honoré de Balzac What you don’t sweat out when you’re young will turn into tears when you’re old. Japanese proverb Without labor nothing prospers. Sophocles No one ever drowned in sweat. U.S. Marine Corps There is no substitute for hard work. Thomas Edison Pleasure in the job puts perfection in the work. Aristotle Your purpose in life is to find your purpose and give your whole heart and soul to it. Buddha A dream does not become reality through magic; it takes sweat, determination and hard work. Colin Powell Inspiration usually comes during work rather than before it. Madeleine L’Engle 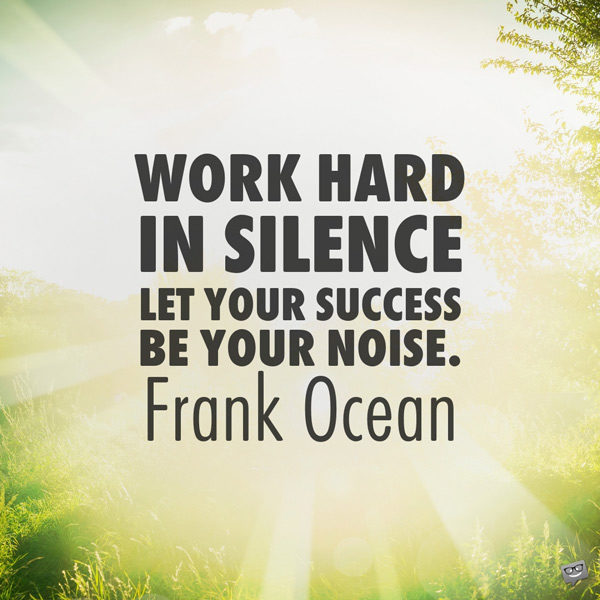 Work hard in silence, let your success be your noise. Frank Ocean The more I want to get something done the less I call it work. Richard Bach Dreams don’t work unless you do. John C. Maxwell The day you plant the seed is not the day you eat the fruit. When you feel like stopping think about why you started.

Action is the foundational key to all success. Pablo Picasso It’s Hard to beat a person who never gives up. Babe Ruth

Quotes about Success and Hard Work